John Cyril Hawes was born in 1876 near London, into a devoutly Anglican upper-middle-class family.  He was the youngest of three sons, and had a very conventional education, the last part of which was at the King's School in Canterbury.  After completing his education he was indentured to a firm of architects in London, and studied at the Architectural Association and the London School of Arts and Crafts.

He was accepted into the architectural profession in 1897.  Very shortly after this he experienced a religious calling which changed the direction of his life, and led to ordination as an Anglican deacon in 1903.  Later in life, after a two-year posting in The Bahamas in 1909-1910 and many years of struggle with his beliefs, he converted to Catholicism.  After a period of personal and spiritual upheaval, he undertook further study in Rome and was ordained a priest again in 1915, this time as a Catholic.

Almost by chance he was recruited in Rome by Bishop William Kelly from Geraldton, a diocese in remote Western Australia, with the promise of a commission to design a cathedral for the fast-growing town.  He spent the next twenty-four years of his life in Western Australia, ministering to the small but widely-scattered congregations and undertaking an incredibly productive program of design and construction throughout the midwest region.  The Cathedral of St Francis Xavier in Geraldton is the most significant of his buildings there.

He left Western Australia in 1939 and returned to The Bahamas, where he spent the remainder of his life living in the stone hermitage he built for himself on Cat Island.  Almost to the end of his life he continued to design, build, renovate or extend many other buildings throughout The Bahamas.  After his death in 1956 he was laid to rest in a cave beneath his hermitage, in accordance with his detailed instructions.

The first-ever Hawes design to be built was this quirky little house in Bognor Regis on the south coast of England.  It was built in 1898, as a holiday house for himself and his two older brothers.  Hawes wanted ocean views but the house is one street back from the waterfront, so he stacked the three bedrooms up on top of each other above a small entry hall, with a flat terrace on the top.  A kitchen and living room are provided by the adjoining structure at the rear.  It was quite radical for its time and caused a good deal of interest in the architectural world, and the Bognor Regis community. 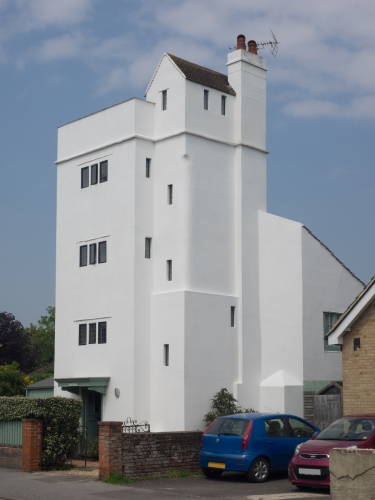 His first church commission was this one: St Christopher's in Gunnerton, a tiny village in Northumberland, near the Scottish border.  It was based on a model of a an "ideal" church which he had made and exhibited at an exhibition by the Royal Academy in 1898, and which attracted considerable favourable comment from other architects. Hawes himself always considered it one of the best things he ever did. 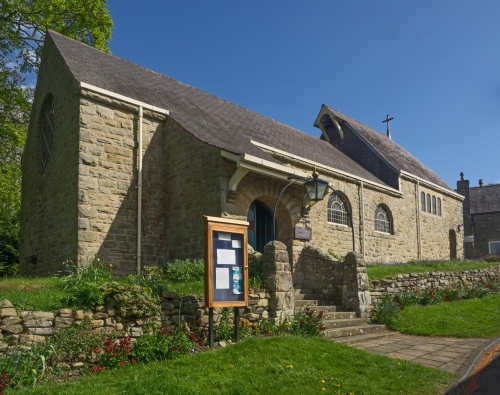 During his first visit to to The Bahamas in 1909-10 as an Anglican, Hawes repaired and renovated many buildings that had been devastated by a huge hurricane in 1908.  This one, St Paul's, is on Long Island and was for a time known as "The Pearl of The Bahamas".  It was one of his first attempts at making a hurricane-proof building, with its massive concrete roof over the sanctuary section. 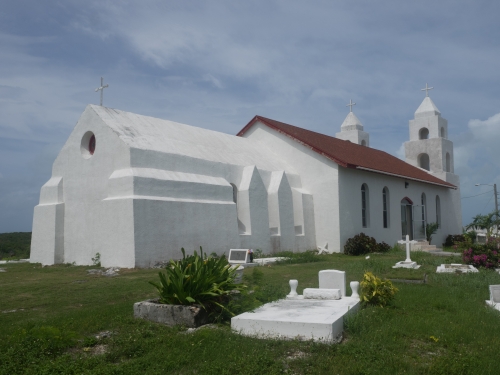 Hawes was enticed to move to Western Australia in 1915 by the then bishop of Geraldton, William Kelly.  The chance to design a cathedral for the town of Geraldton was the main attraction, and the magnificent Cathedral of St Francis Xavier is the result.  It had a very long gestation, taking almost the entire length of his stay in Western Australia to be completed. 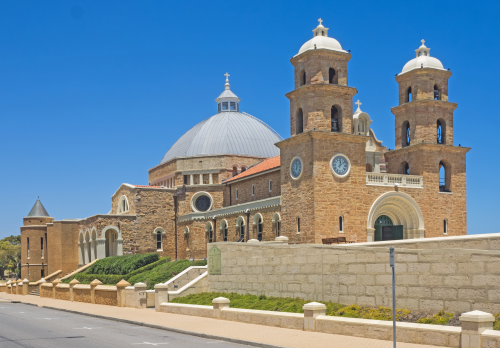 Hawes was the parish priest in Mullewa for several years in the late 1920s and early 1930s.  During that time he designed and built the Church of Our Lady of Mt Carmel, a very personal project.  It was built almost entirely by his own physical labour, and he also added a priest house adjoining it for his own place of residence.  It is strongly influenced by the Church of St Trophime at Arles in France. 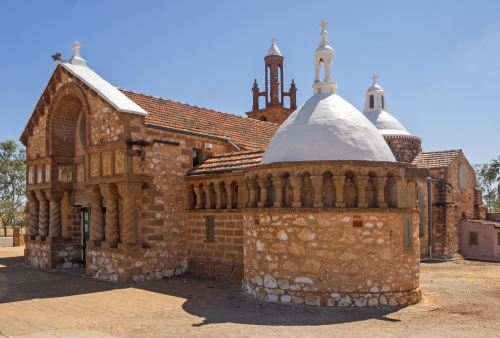 Hawes designed very few private residences anywhere, but this one, at Melangata Station north of Yalgoo, was built quite early in his stay in Western Australia. It is very unusual for an Australian homestead, with its arched entrances, a castellated tower on the north-east corner, and even its own tiny chapel inside. 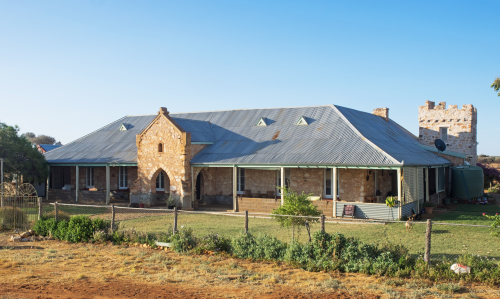 Hawes' second stay in The Bahamas lasted from 1939 until his death in 1956.  He acquired land on Cat Island almost immediately after returning there, and built this remarkable hermitage to be his home.  It was built almost entirely with his own hands, and the chapel in the centre was given priority.  He celebrated his first mass in it in May 1940.  After he died, his body was interred in a sealed chamber in the cave beneath the hilltop, the entrance to which can be seen at lower right. 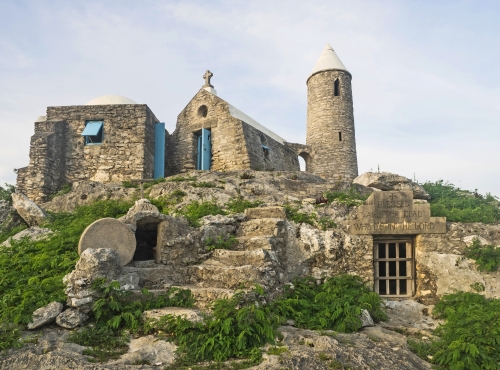